How to proceed and update to Drupal 10

The upgrade from Drupal 9 to Drupal 10 will be effortless compared to upgrading to Drupal 9 from older versions.

The Drupal 10 update was planned to release in the month of August 2022. As the CKEditor’s end of life is November 2023, it was necessary to integrate Drupal 10 with the next version of CKEditor to function efficiently.

As it was not possible to integrate the new version of CKEditor with Drupal 10 before the deadline, the upgrade was pushed to the end of 2022.

A benefit of pushing the update to December 2022 is that the developers will get more time to stabilize the CKEditor. Also, the site owners will get sufficient time to upgrade the requirements to be available for Drupal 10.

In this article, we explain to you how you can prepare and upgrade to Drupal 10.

The Drupal 10 Readiness Initiative is designed to build a clear roadmap to release the latest version before the deadline.

Third-party software like CKEditor, Symfony, PHP, Compressor, etc. on which Drupal is dependent has its own roadmap.

They have their own updates and end-of-life. Drupal must meet all the criteria and keep the components updated to aid the upgrade of Drupal 10.

Before you can migrate to Drupal 10, you need to upgrade these software components:

CKEditor is the most crucial component that is required to migrate to Drupal 10. Drupal 10 can be integrated with CKEditor 5. Using CKEditor 5, you can directly edit the written content on the webpage. This comes with a better interface which is similar to Google docs.

Symfony framework is important in managing cookies and handling and routing incoming requests and services. Drupal 10 will be using Symfony 6.2 version.

A PHP 8.2 version is used in Drupal 10. Among Drupal 10 updates, the update to PHP 8.1 will often be the most challenging and risky.

A Composer can be used for Drupal and all dependencies. A composer of version 2 is preferred in Drupal 10.

Some of the core modules were not widely used by the users. That’s why they will be removed to avoid clutter and improve the user experience. The following modules are likely to be removed:

What are new Key features of Drupal 10?

The previous front-end theme ‘Bartik’ was discouraged by users calling it obsolete and not suitable for advanced features. ‘Olivero’ is a new theme that gives a modern look and makes the user easy to navigate through the Drupal site. 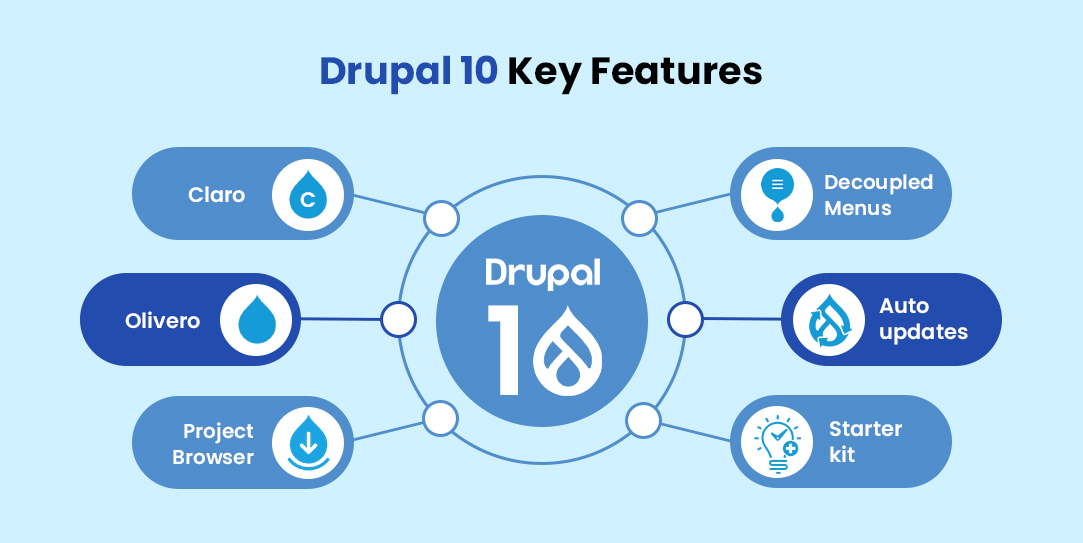 Drupal 10 will enhance your site's security with auto updates and give you new features that will make you more autonomous.

Since classy provides markup and CSS, it is necessary to maintain backward compatibility in Drupal 9 and below. To solve this problem, Classy is replaced by the ‘Starter kit’ theme. This new theme is easier to maintain.

How to prepare your site for Drupal 10?

As PHP and MySQL are releasing their latest version, it is hard to maintain compatibility on the website. As a result, Drupal 7’s end of life is November 2023. After that, you will not receive any bug updates, security, or community support from the officials. Businesses are losing out on a lot of rich features and updates. As Drupal 8 already ended its life in November 2021, you must migrate to Drupal 9.

The release of Drupal 8 brought some architectural changes that included modern libraries and software. Drupal 8 reached the end of life in November 2021 due to its dependency on Symfony 3. You won’t get any bug updates, security, or community support from the officials. It is easiest to upgrade to Drupal 9 because of the similarities between them.

Drupal 9 was released in June 2019 by updating a few modules in Drupal 8. This also means the end of life for software like Symfony 4 and CKEditor 4. As Drupal 9's end of life is November 2023, you have 11 months to upgrade your site. It is easiest to upgrade to Drupal 9 because of the similarities between them.

Drupal is not just a CMS but also a robust web development system designed to handle complex websites. According to Drupal, more than 60.6% of businesses still use Drupal 7. Businesses are missing some important features that can help scale their businesses. With the Drupal 10 update coming on 14 December 2022, it is important that you grab the benefits of this update to the fullest.

We at LN WebWorks, a leading Drupal web development company, have the experience of working with hundreds of businesses worldwide and can help you make a transition from your existing Drupal version to Drupal 10 effortlessly.

Get in touch with our team of Drupal experts to learn more about Drupal services.

Pankaj is a Senior UI/UX specialist with more than ten years of industry experience who focuses on usability, user experience, and user research in his designs. He has worked with small and large teams, including management of LN Webworks Organization.

Elevate Your Digital Presence With Us. 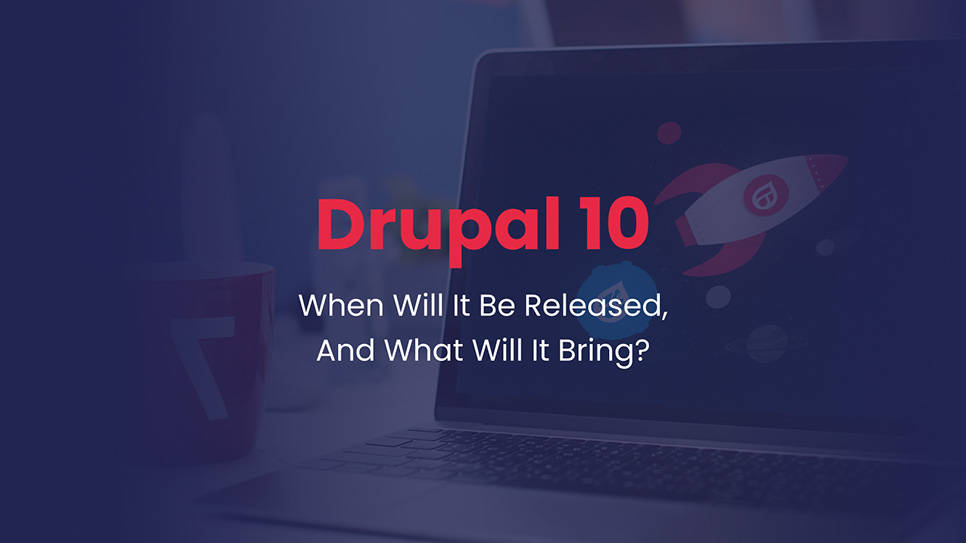 Drupal 10: When Will It Be Released, and What Will It Bring? 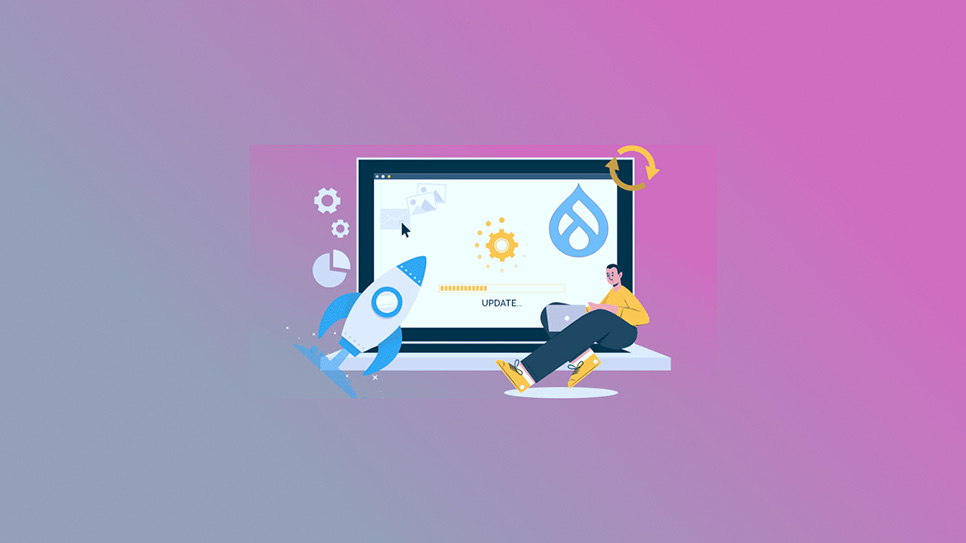 The Dawn Of Drupal 10: Readiness Initiative For 2022 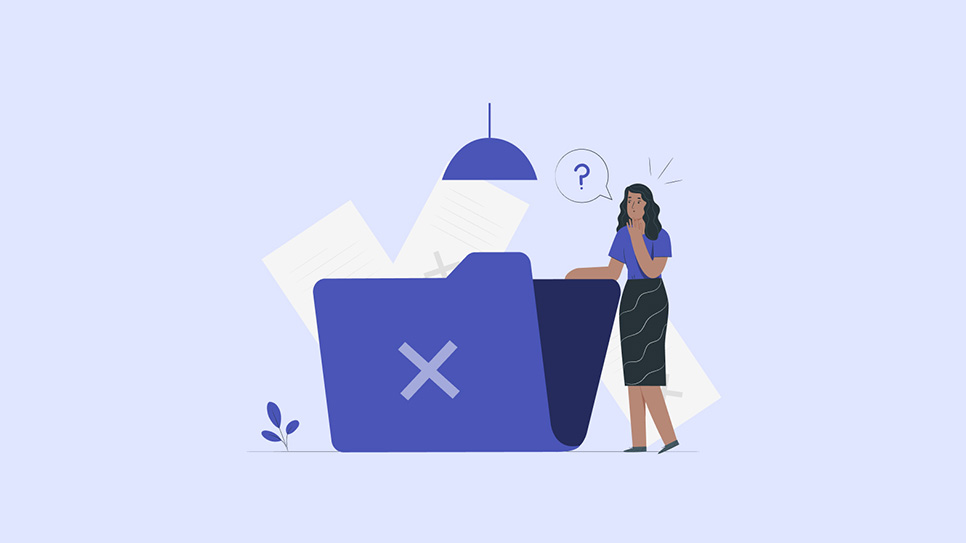